To gain a better understanding of what office environments employees have today and desire to have in the future, as well as how shifting workplace space strategies are impacting workers, we commissioned the VergeSense 1H Workplace Experience & Office Space Employee Survey.

The report was conducted via an online survey that was administered to 500 office workers aged 25-to 64-years-old in the first half of 2019 and was weighted for the U.S. population by gender and region.

Here’s what we found:

Ever since the cubicle farms of the 1980s were replaced by more modern open office designs in the 1990s and 2000s, the workplace design industry has been focused on open office concepts.

However, even science has struggled to decide if open offices are good or bad for workers, and we’ve recently seen a growing amount of research supporting a move away from at least traditional open office designs. While that debate continues, we’ve also begun to see a bifurcation of open office concepts, with a new, even more flexible open-concept arriving in the form of agile or dynamic workplaces.

Agile or dynamic working essentially takes the set desk out of the open office concept. Rather than having a set desk within a wide-open workplace environment, workers have freedom and flexibility to work in different areas of an office through hot-desking and different shared spaces.

Of the respondents to our survey that say they work in an open office concept, 40% noted that they have no set desk and the freedom to choose where to work.
This aligns pretty closely with previous data from JLL, that found as of 2017, 29% of all offices had moved to agile work environments where workers move interchangeably between desks, and working space can be easily rearranged with lightweight and moveable furniture.

Startups and Co-Working Are Leading the Transition to Dynamic Workplaces

When we further analyzed the work setups that respondents say they work within today by the size of their employer’s headcount, we found that employees at startups (11-50 employees) were the most likely (23%) to be working in agile/hot-desking environments.

On the other side of the equation, those at large businesses (1,001-5,000 employees) were the least likely to have their employer jumping on the agile working movement (8%). Workers at these large businesses were also the most likely to be working within a cubicle or closed office setup (63%).

That said, even large corporations (10,000+ employees) are moving to agile/hot-desking environments with 12% of employees within these organizations saying they are now in this setup. Meanwhile, those working for small businesses (51-100 employees) were the most likely (43%) to be working at a set desk within an open environment.

Of the other nearly half (52%) of those currently working at a desk within an open area, 28% said their ideal setup is a set desk in a cubicle/non-open office and 24% said their ideal set-up is hot-desking. Whatever the reason, it’s clear that those working at a set desk within an open environment are the most interested in changing their work setup.

There were also some interesting findings by demographics when we asked office employees about their ideal work setup. Generation Xers (40- to 54-year-olds), not millennials, were actually the most likely (35%) to say their ideal setup would be no set desk and freedom to choose where to work. On the other end of the spectrum, Baby Boomers (55- to 65-year-olds) were the most likely (54%) to say their ideal work setup was having a set desk in a cubicle/non-open workspace. 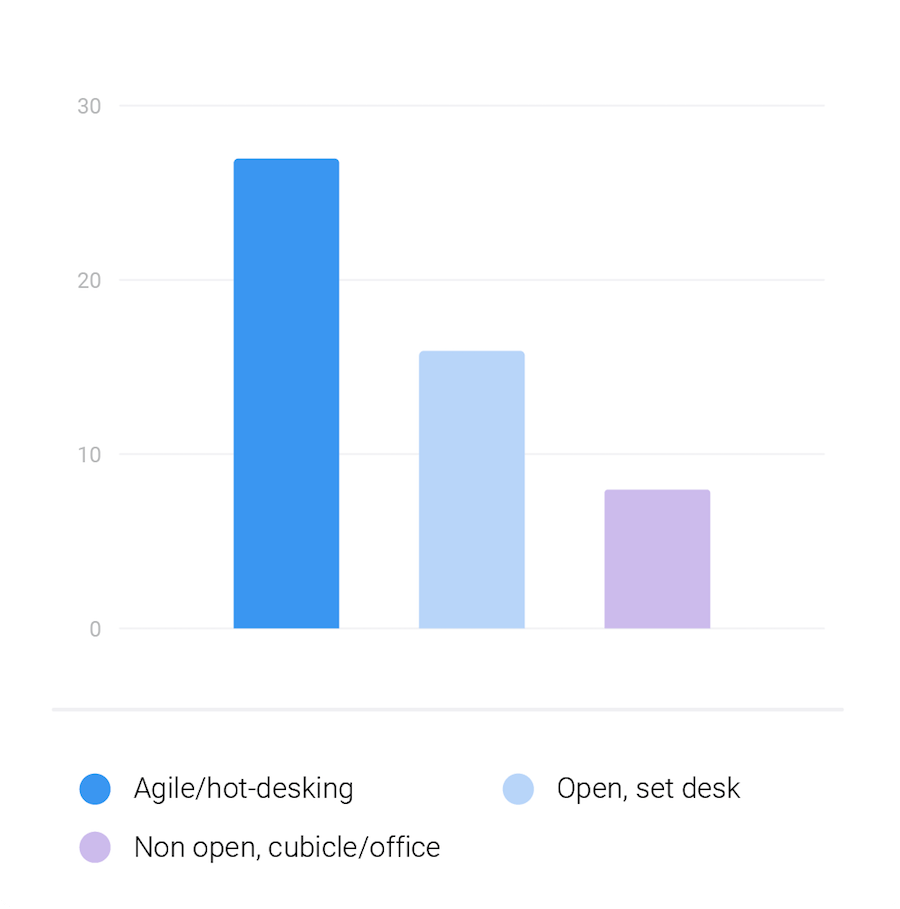 Although agile working environments are extremely popular with the employees within them, freedom, flexibility and constantly moving workers also come with a “quiet problem”. Workers in these environments were the most likely (27%) to say it’s always hard to find quiet places within their workplace to get stuff done.

Comparatively, only 16% of those with a set desk in an open environment and 8% of those working within a cubicle/non-open office say it’s always hard to find a quiet place to get stuff done.

The results make sense given it's much easier to plan for workplace noise when you know where workers are going to be doing work from. Technology like sensors may actually play a role in addressing this issue in the future by being able to smartly recommend areas within agile workplaces to assign employees interested in either collaborative or quiet time.

Last year, VergeSense found that 30% of conference room bookings end in no-shows. Essentially, a large number of employees only book conference rooms when they feel it is necessary. If they find out they can avoid the visit to a conference room later, they’ll often skip their booking altogether.

So are employees having a difficult time finding collaboration space because of conference rooms being ghosted by their colleagues?

64% of Workers Say Office Space Is at Least 'Sometimes' Underutilized

While agile workers certainly have issues finding quiet and collaboration space, they were the group of employees that believed their employer was using their full office space the best. In fact, when we looked at responses by office space type, employees working within agile/hot-desk environments were the most likely (53%) to say they rarely or never see underutilized office space.

While people may believe their offices are being utilized, our sensors show different results. In fact, in 2018, we found the average utilization of an office was only 40%. That’s a whopping 60% of the office that isn’t being used at a given time, which is a waste-of-money to say the least.

Employees want their employers to help them thrive professionally and personally, so we asked what rooms or areas they’d want their employer to add to their workplace. Overall, it seems that employees would love employers to add a wellness and fitness area to their workplace (33%), along with some nap rooms (30%).
Not only will this help employees make the most of their time, but it also encourages employees to be healthy, helping them produce the best work possible.

More men than women wanted a game room by a relatively big difference. 13% of men want a game room, whereas only 5% of females think that’d be the best addition to their office. In the reverse, more women (15%) think adding a kitchen or snack room would be a better addition than men (13%).

Coming in as a nice surprise, the gender distribution for those that wanted the addition of a pump/lactation room was about even at 4.5% of females wanting this and 4% of men. Prior research has found that companies that offer comfortable lactation rooms and support programs see a 94% retention rate among their female employees.

Interestingly, 45- to 54-year-olds were the most likely to advocate for a game room in their office with 13% of them wanting that over any other addition. Meanwhile, 20% of 55- to 64-year-olds believe a kitchen or snack room would be the best addition, which is a higher percentage than other generations.

Not surprisingly, those working in open office setups with a set desk were the most likely to say they’re interested in their employer adding a phone booth or room for calls (8%).